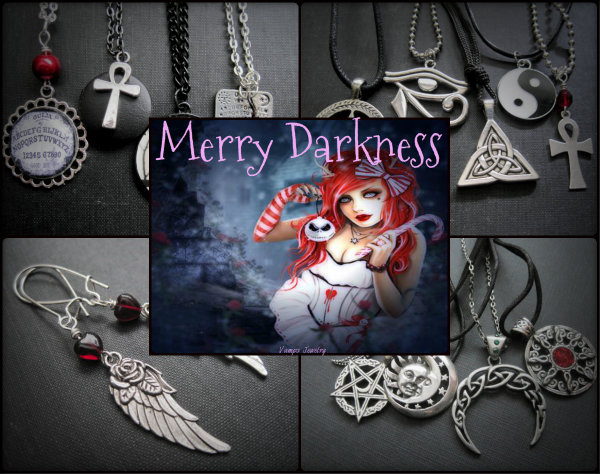 ‘Twas the night before Goth-mas
And all through the homestead
All the creatures were stirring
Even the severed head!
The fishnets were hung by the chimney with care
In hopes that Saint Peter soon would be there
The children were roaring and out of their beds
Whilst absinthe-induced visions danced through their heads
And Morticia in her death hawk and I in my top hat
Had just settled down (upside down like a bat!)
When out on the lawn there arose such a fright
I sprang from my coffin to get a better sight
Away to the window I stalked like the undead
Tore off the bars and curtains to shreds
The moon on the tops of the gravestones below
Made the world look like the set of a b-movie show
When appeared (to my fiendish eye’s joy)
A hearse,  dragged along by eight skinny goth boys
With a tall gaunt driver, so morbid and sweet
I knew in an instant it had to be Saint Pete!
More rapid than zombies, his harem they came
And he whipped them and groaned and called them by name
“Now Daniel, now Ian, now Dave and Robert!
On Rozz, on Lux, on Eldritch and Nik!
To the top of the morgue, to the top of the mortuary
Now dash away! Dash away! Dash and don’t tarry!”
As dead bodies do when rigor mortis sets in
When their bodies spring up, twist and spin;
So up the manor these goth boys they ran
With a hearse full of gifts and Saint Peter, our man
And then,  in a flash, I heard from the ceiling
The moaning and groaning and the goth boys were reeling
As I drew in my body, so as not to lose my head
Down the chimney Saint Peter came with the softest of tread
He was dressed all in black, from his head to his boots
And his clothes were ripped and torn as if by a brute
A coffin-full of toys he had dragging on the ground
And he looked like a ghoul arisen from the grave mound
His eyes - how they glinted, his dimples how eerie
His cheeks were sunken, his nose oh so dreary
His devilish mouth was drawn up in a smirk
And the gaunt of his skin made him seem berserk
The end of a clove he had pressed ‘tween his lips
And the smoke of it clouded his face like an eclipse
He had a thin face and a cadaverously slim form
That jerked when he danced like a tree in a storm
He was sarcastic and strange, the epitome of dark
And I smirked when I saw him, teeth glinting like a shark
A wink of his eye and the twist of his arm
Made me wonder if I were coming to harm
He spoke not a word, for singing was his job
And ripped all our fishnets, to which he gave a sob
And flicking his wrist with the greatest of flair
A great cloud of smoke and he flew through the air
He sprang to his hearse, his boys’ backs all an arch
And through the cemetery they began their funerary march
But I heard him lament, as he crept out of view,
“Dreary Goth-mas to all, for its long overdue!”